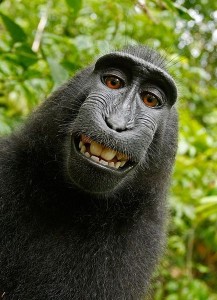 In today’s culture, selfies are not generally considered vain or selfish. In fact, they tend to produce some of the most flattering photographs of ourselves.

Plus, it’s easy. In fact, it’s so easy a monkey could do it…and one did.

Back in 2011, David Slater, a British nature photographer set forth with his camera for the Tangkoko Reserve in Sulawesi, expecting to take noteworthy pictures of Indonesia. However, Slater’s photography skills were outshined. He put his camera on a tripod around many crested macaque monkeys, waiting for it to automatically focus on the curious animals. That’s when one extra curious and creative monkey saw the opportunity for a selfie shoot. The six-year-old male monkey, named Naruto, took a photo of himself bearing a huge grin (pictured above).

Slater, upon finding the photo of Naruto on his camera, included it in his published book, appropriately titled “Wildlife Personalities.” Meanwhile, the photo gained an online following, appearing on various sites including Wikipedia. When Slater asked Wikipedia to remove the photo, they declined. They reasoned that since Slater did not click the shutter button, he had no ownership right to it.

That’s when PETA (People for the Ethical Treatment of Animals) stepped in, because wherever there’s an issue of a monkey’s labor and creative liberty, there’s PETA.

Last year, the organization sought a court order allowing it to represent Naruto and administer proceeds from the pictures for Naruto’s benefit along with other crested macaques in an Indonesian reserve. After all, those monkeys could buy quite a few bananas with that dough, no?

Slater asked the court to dismiss the case, asserting that his company, Wildlife Personalities Ltd., had obtained a valid copyright for the photographs and also reminding the court that a monkey lacks necessary legal standing to bring the suit.

PETA contended that no person owns the copyright because a human didn’t snap the pic, a monkey did! Slater looked to Congress, wanting the legislative and not the judicial branch to decide whether provisions of copyright law apply to non-human mammals.

Sadly for Naturo, though, U.S. District Judge William Orrick declared in San Francisco federal court that, “while Congress and the President can extend the protection of law to animals as well as humans, there is no indication that they did so in the Copyright Act.”

Jeff Kerr, general counsel for PETA, claims that the organization will not stop fighting for Naruto’s rights, so that he will be seen as more than a piece of property himself.

For now, Naruto will remain in Indonesia monkeying around and won’t be embarking on a lucrative photography career.